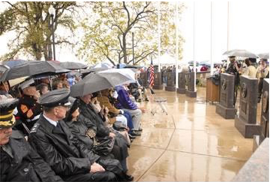 Rain couldn’t dampen the spirits or pride of the hundreds who gathered Saturday for the El Dorado County Veterans Memorial dedication ceremony.

“I am so proud of the community,” said memorial founder and veteran of the Marine Corps veteran Rich Buchanan. “I am so proud of everybody involved in the monument. It’s everything I thought it could be.”

Guests at the Veterans Day dedication event, including the family of a fallen Gardnerville soldier and Congressman John Doolittle, stood under a sea of umbrellas as the Sacramento Fire Department Pipe and Drum Corps commenced the ceremony. 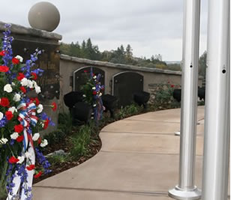 “It’s become a reality,” Buchanan said during his turn at the podium.

For Navy veteran Don Donaldson, 88, the event has been a long time coming. Donaldson joined the Friends of the Veterans Monument in 2001 and said after the ceremony, “I feel great, at long last.”

The Pollock Pines veteran also issued a statement about the path that finally led to the successful completion of the memorial.

“This all materialized because of the hard work – the determination – and the love and patriotism that the citizens of a small, rural county have for our military personnel who have made their way of life possible,” Donaldson wrote. “The Friends want to thank all who have contributed in any capacity.”

Construction of the veteran’s memorial became a priority and a collaborative effort between the community, Friends and El Dorado County government last year, but Buchanan first thought of the project during his days in Vietnam. The memorial, which sits on the east end of the El Dorado County Government Center, cost about $1 million to construct, according to Buchanan.

For everyone attending Saturday’s ceremony, it was worth every penny. Architect of the monument and Coast Guard veteran Peter Wolfe told the crowd the memorial is a shared dream that provides people with a special place outside the ordinary to remember the sacrifices. The memorial, Wolfe said, says, “Welcome home, veteran. Thank you for a job well done.”

With hands over hearts, and some tears in their eyes, everyone watched as the flags for each branch of service inched up to the tops of the flagpoles. Later when the Cantare Choral and the Gold Rush Barbershop Chorus sang “America the Beautiful” a few more handkerchiefs came out.

Navy veteran Bill Schultz said the turnout really impressed him. Even when rain clouds made the flyover – 144th Fighter Wing of the California National Guard – impossible to see, people still looked to the sky when they heard the roar of the engines and smiled.

Schultz summarized the sentiment felt during the process of getting the memorial built and the dedication with one statement.

“Today we are here to deliver two simple words to veterans: Thank you.”