John Richard Rossi was born April 19, 1915, in Placerville, Calif., to a family with 10 children. After graduating high school he enrolled in UC Berkeley and for two years studied to be an electrical engineer.

But the dream of flying remained. So in the fall of 1939, Rossi left college, enlisted in the Navy and was selected for flight training. By 1940 he received his wings, but not the assignment — or the chance for adventure — he wanted. Instead, he was sent to work as a flight instructor in Pensacola, Fla.

In the days before the United States entered World War II, Rossi learned of a secret volunteer group being formed by Claire Chennault, an Army Air Corps officer who had resigned his post to lead the effort. The volunteers would travel to China and defend the nation against attacks by the Japanese. Pilots with the American Volunteer Group would earn $600 a month, plus $500 for each plane shot down. 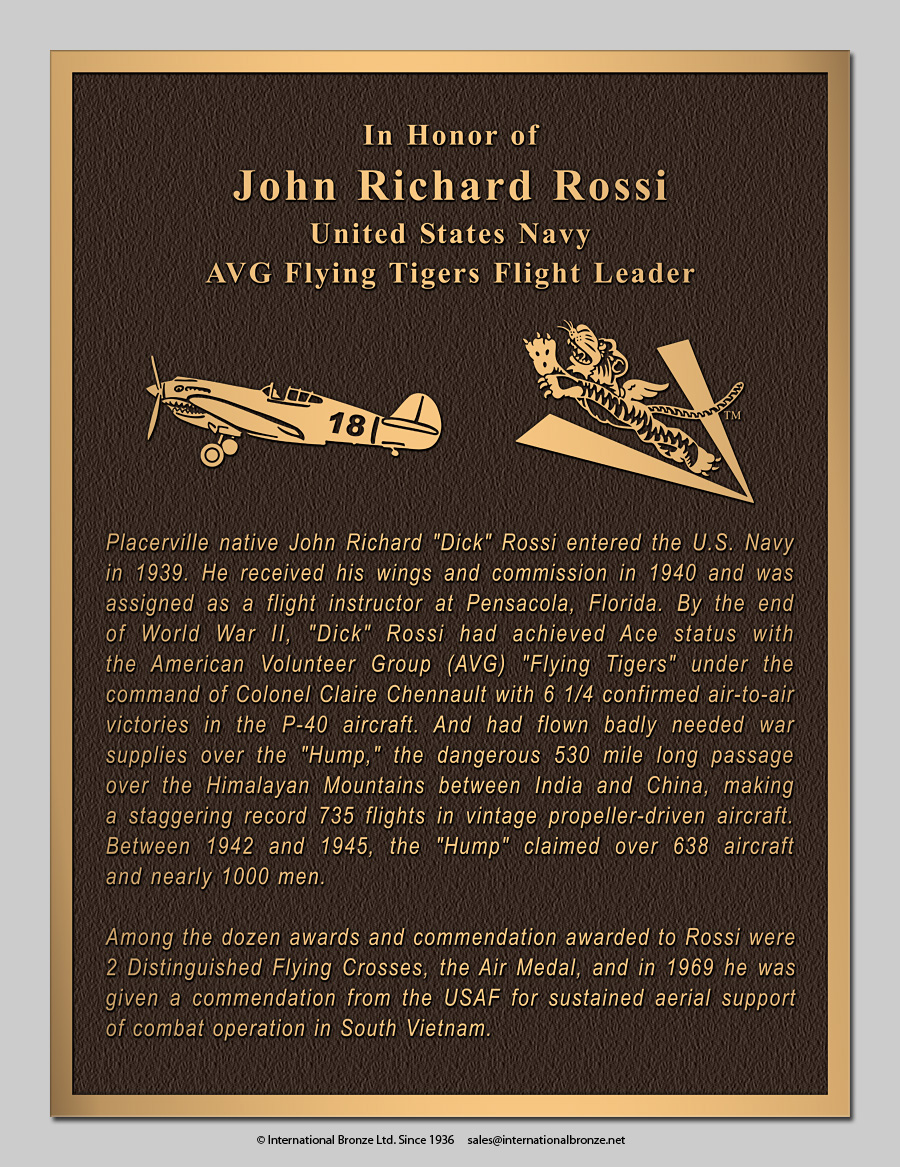 Rossi resigned his Navy commission and signed up.

“When you’re young, you’re looking for adventure more than anything,” Rossi told the San Diego Union Tribune in 1986.

In November 1941 Rossi and his squadron landed in Burma (now called Myanmar). In December, over Kunming, China, the site of devastating attacks by the Japanese, Rossi was in the thick of the battle.

“We landed in the midst of terrible damage, with bodies lying all around,” Rossi told The Times in 1991. But the Flying Tigers shot down three enemy planes, a stunning turn for the Japanese pilots who until then had known only victory.

In July 1942, seven months after the U.S. had entered the war, the group was disbanded. Rossi spent the rest of the war years working as a pilot for the China National Aviation Corp., delivering supplies from India to China. He made 735 trips over the Himalayas.

After the war ended, Rossi spent the next 25 years working as a pilot for Flying Tiger Line, a freight carrier, whose founders included Robert Prescott, another member of the Flying Tigers, and Rossi. The line also transported people in the military and their dependents to bases all over the world. Rossi met Lydia Cowgill, who worked as a flight attendant for the line, and the two married in 1966.

Prescott and Rossi also collaborated with others to form the Hungry Tiger, a popular restaurant chain in Southern California. At its height, the chain had 42 restaurants.

In his 65 years as president of the Flying Tigers Assn., Rossi and his wife helped organize reunions of the pilots and other Flying Tigers, and through speaking engagements helped spread awareness about their role in history.

Though the Flying Tigers were viewed as heroes, they were not seen as veterans by the U.S. government until 1991. Before then the Pentagon argued that the men were volunteers. That position changed after classified documents revealed the role of the government in forming the group.